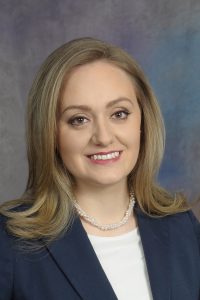 Sara McGrath joined Napierski, VanDenburgh, Napierski & O’Connor in 2017. She is admitted to practice in the State of New York and the U.S. District Court for the Northern District of New York.

Sara graduated cum laude with a degree in Philosophy, Politics and Law from Binghamton University in 2010. She graduated from University at Buffalo Law School in 2013. Sara is experienced in handling a variety of civil litigation matters, with a focus in the areas of medical malpractice defense, personal injury defense and insurance coverage disputes, and general litigation defense. Sara has also worked with low-income victims of domestic violence helping them obtain orders of protection and other legal remedies available through the courts while working at Safe Horizon. While at University at Buffalo Law, Sara worked in the civil legal service department at the Legal Aid Bureau of Buffalo where she primarily handled divorce and custody disputes. Sara clerked at the New York State Supreme Court under the Honorable Joan Kenney where she assisted in drafting judicial decisions. Sara has also worked on criminal appeals to the New York State and Federal Courts including federal criminal appeals to the United States Court of Appeals for the Second Circuit. She also was a member of the Buffalo Environmental Law Journal and the Women Children and Social Justice Journal.